Known as one of the best builders in Fortnite Battle Royale, TSM Myth is one of the fastest growing streamers in recent years. He consistently competed with people like Ninja in viewers, albeit streaming at different times of the day. 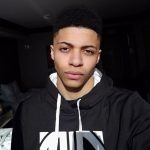 Myth is the captain of the TSM Fortnite team and one of their earliest members alongside Daequan and Hamlinz. Since the creation of the team, TSM has made multiple vlog and sponsored videos with the crew to promote products.

After falling in viewers and subscribers a few months ago due to controversy, Myth is bouncing back due to his sense of humor and skill.

What is Myth’s Net Worth?

From 2016 to the present, Myth’s net worth is close to 2 million USD. Myth skyrocketed to fame with the rise of Fortnite and his talent. This fame lead to TSM reach out to him and a few others before Fortnite even had an official competitive scene!

Like most streamers, Myth’s income can be attributed to his Twitch and YouTube channels. These channels bring in donations, subscribers, and advertisements. On top of that, Myth’s association with TSM means he is sponsored by companies like Gillette and Chipotle.

How Old is Myth?

Born on May 24, 1999, Myth is currently 20 years old. He was born and raised in Dearborn, Michigan before moving to the TSM Fortnite house in Los Angeles, California.

How Tall is Myth?

Just a little behind TSM’s tallest member Daequan, Myth is around 5ft 10in.

What is Myth’s Real Name?

Myth’s real name is Ali Kabbani. Before going by Myth he was known as TheMyth and ImTheMyth.

What is Myth’s Nationality?

Myth is of African American and Syrian decent.

How did Myth rise to fame?

Before Fortnite, Myth was still playing video games. At 20, he is one of the youngest successful streamers with a high net worth. Much of this can be attributed to his skill. He started playing Fortnite extremely early due to previously playing a game called Paragon, also on the Epic Games Launcher.

After Paragon shut down, Myth decided to try his hand at Fortnite. When the battle royale mode came out, his streaming career really started. This young, talented individual with a sense humor enticed viewers and gave him exposure.

It isn’t easy for streamers to bounce back after they’ve fallen in numbers. Once people decide you’re not worth their time they rarely come back. Still, Myth’s consistency and brand image with TSM have let him climb back up as a popular streamer.

With the rise and fall of Fortnite metas, Myth is always vocal to the community about his opinion. He also isn’t afraid to take time off from the game when things aren’t interesting to watch, bringing in a loyal fanbase that enjoys him for who he is.

If you have any more questions about Myth just leave a comment below!